|  0 Comment
You can watch the video of this explanation here:  Video 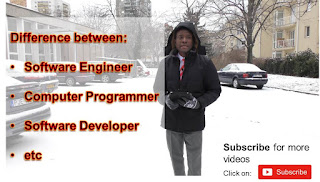 Many person in the field of IT don’t get as productive as they should be because they don’t consider the differences between related professions.
This is especially true in the field of IT where some organization use same employee to perform different job roles simply because the roles are related under the ICT field
In this brief article, I would focus on difference between Software Engineer, Computer Programmer, Application Developer and related roles, beginning with Software Engineer.

Who is an Application Developer
An application developer is an ICT professional involved in one or more of the phases of the Software Development Life Cycle(SDLC).
Remember that the software development process is made up of a number of phases, some of which may be iterative.The number and specification of these stages, though depends on the particular software development model. For example the Water Fall model has the following phases:

So to be a software developer, you must be involved in one or more of these phases. (Not as a user though!).

Which one is Better?
Granted, how much earnings is involved for each of the professionals depends on the organization and the tasks involved. But I would say, that a professional computer programmer that is vast in a number of programming languages have some edge over other roles. This is because a programmer is normally paid by hour. Added to that, a programmer can take up a number of contracts and work on them from home. But more importantly, one can become a good programmer without having to pay for any education or training. This ones are called ‘Self-taught Programmers’.

Final Notes and Recommendation
I would recommend that if you are a beginner start by taking tutorials on some programming languages. I suggest starting with Java due to its viability and availability of tools. If you are in a different field altogether, but want to learn programming, you can also start wit these series of simple tutorial you can get from this link: