Today we would give a clear and simple explanation of Support Vector Machines. We would discuss the basics of support vector machines in very clear terms. 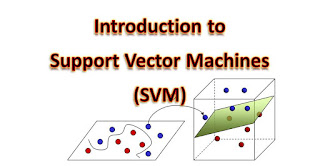 We would cover the following 6 topics in this lesson.

You need to note the following points

1. What is a Support Vector Machine?

A support vector machine(svm) also called support vector networks is a supervised learning method that is used for regression, classification and outlier detection.
Given a set of training data set, with each observation marked as belonging to either of two classes, as Support Vector Machine develops a model that assigns a new observation to one class or the other.

2. How Does Support Vector Machines Work?

The maximum-margin hyperplane is one that lies at the midpoint between these two hyperplanes.

Now the two classes could be defined using the linear model given by:

For the example above example in Figure 2, the parameters has to  be chosen such that for the blue data points, y(x) < 0 and for the red data points y(x) > 0.
So we can now define the equations for the two classes as

For the blue class on the left

For the red class on the right:

This means that each data point must lie on the correct margin
We can now determine the maximum-margin hyperplane by fitting a line exactly half-way between the two hyperplanes. This is illustrated in Figure 3 below.

6. Introduction to the Kernel Trick

When it comes to solving complex classification function e.g for very large data sets, then the simple SVM method may not be very effective. A method known as the kernel trick is employed.
A function that takes as input, vectors in the original input space and returns the dot product of the vectors in the feature space is called a Kernel Function or the Kernel Trick. We would not discuss more on the kernel trick here since there is another complete lesson on the Kernel Trick

We have examined the basics of SVM or Introduction to Support Vector Machines. This lesson is meant to give you an overview of what the concept is. For indepth study of SVM, I would recommend getting a  textbook such as ‘Pattern Recognition and Machine Learning‘ by Bishop.

I would like to thank you for reading. For any observation, you can leave a comment on the form on the left side of the page.