|  0 Comment
In this short and simple lesson, we are going to discuss techniques in carrying out source code based testing.

Source code based testing is applied when what is available is the source code or the binary for the program. 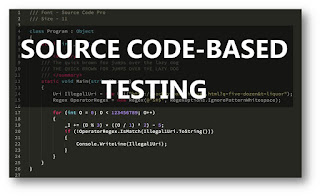 The objective is to check for:

This technique works if the source codes contains well-formated annotations that helps to explain the code. These could also be pre and post conditions.
Some of the tools used for annotation-based testing includes QuickCheck and AutoTest

In this technique, the program is represented as a search space and the objective would be to cover all decision branches in the source code. Some of the tools include EvoSuite

Other issues with symbolic execution include: