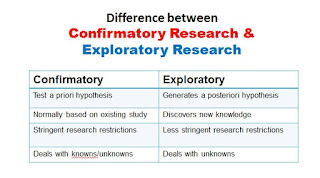 Confirmatory Research Data Analysis
Confirmatory research are research that test the validity of already made hypothesis, known as a priori hypothesis. This means that possibly some previous studies have been carried out on the subject matter and some results have been presented. This research method is normally based on previous studies, to confirm an existing result or theory
The benefit is that it makes the results more more meaningful.

Table 1 presents a summary of the difference between confirmatory and exploratory research.