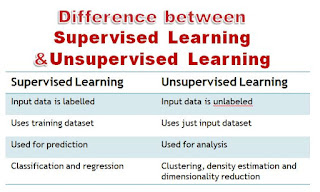 We would begin the discussion with a of Supervise Learning

Supervised Learning
This is a branch of machine learning that tries to find a relationship in a given training data set.
In supervised learning, the input consists of a set of input vector together with a corresponding target vectors.
In supervised learning, you have input variables (x) and out variable (y) and you have to use some algorithm to determine mapping function from the input to the output

When this is done, then given a new input data, you can predict the output.

Supervised learning is divided into two categories: classification and regression.

Unsupervised Learning
In unsupervised learning is a type of machine learning algorithm that draws inference from input datasets without corresponding labeled response. So here, you just have a set data values, say, only x, and you need to search for trends withing this dataset.
Unsupervised learning can further be divided into Clustering, Density Extimation and Dimensionality Reduction