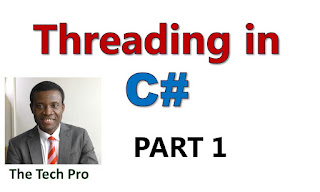 1.  Introduction to Threading
‘A thread is a the smallest sequence of programmed instruction that can be managed independently’ – Wikipedia.
A thread can run independently in parallel with other threads. Languages that support multithreading makes it easy to optimize the cpu time by limiting the time the CPU is idle.

2.  Thread Life Cycle
The life cycle of a thread begins when a Thread object is created and ends when the thread is completes execution or is terminated.

The life cyle of a thread in C# are the following:

Unstarted State: The instance of a thread is created but the start method have not been called

Ready State: The thread is waiting for the cpu time

Dead State: The create completes its execution or is aborted.

When the program executes, the output would be something like shown in the figure: 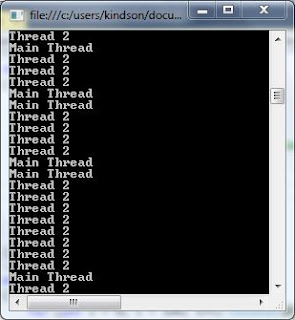 In Program 1, the main thread starts and creates a child thread called t. The child thread t executes a function called Thread2. Note that when when thread is created, the function to be executed is passed in as a parameter. We would explain this program a bit more to help you understand it. For now, try to enter this program in your IDE and run it to see what output you have. If you have any challenges you could leave a comment by the left of this page.

5.  Some Useful Methods of a thread

public void Interrupt(): Interrupts a thread that is in the WaitSleepJoin thread.

public void Join(): Blocks the calling thread untill a thread terminates. This means that you need to wait for the thread to end.

public void Start(): Start the execution of a  thread

public static bool Yield(): Ths causes the calling thread to yield execution to another thread that is ready to run on the current processor..

6.  Creating Threads in C#
Threads are created using the Thread class’ constructor. Just like you saw in Program 1, you create a new instance of a thread and pass as argument, the function you want to be executed.
The function you pass into the thread’s constructor is actually the ThreadStart delegate which indicates wheret the execution of the thread should begin.

In this case, the thread t executes the Go() method, the same time the main thread calls Go(). The output would be that the string “Ndeewo nu!” is printed twice simultaneously.

But if you use the expression:

7.  Notes on Threading
Multithreading in .Net is managed by the thread scheduller. The scheduller ensures that all active threads  are alllocated execution time slots and  that the threads that are waiting or blocked does not tie down the CPU.