1. What is Bot Framework? 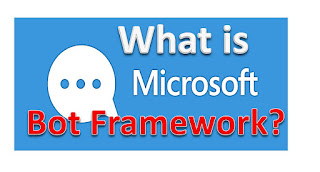 A bot is an app with an conversational interface.A bot normally interacts with users in  conversational way. Bots can communicate withusers either with text messages, cards or voice commands.
Bot service helps you develop bots that support various forms of interaction with the user. Bots could also be designed like a form where the user is prompted to provide cetain inputs. It could also have a more guided interactions such that it provides users with choices and takes decision based on users’ choice.
A bot can provide functionality not only for exchange of text but for multimedia data such images, button, and animations.
Using the LUIS, you have a voice interaction with a bot just like Siri in Apple or Cortana in Windows.

Bot Builder provides an SDK, samples, templates, libraries and other set of tools that help you create and debug bots.
When you create a bot using Bot Service, it is backed up by Bot Builder SDK. In this case most of the codes are automatically provided as template for your bot.
However, you can also  create a bot from the scratch all by yoursefl using the C# programming language in .Net or Node.js.

4. Tools you Need to Build Bot

Now you are curious. You want to know what is needed to start building a bot. To build a bot, you need the following

Note: If you have an Azure account, and you have some good knowledge of programming, you may not need any of this tools. You could actually create your bot in MS Azure, completely online!

Read about Bot Templates in Azure

In this series of tutorials, we would go through the steps of building simple bots all the way to complex bots. Then we would alo build bots using different templates
If you have a question/comments, look to the left of this page, and you can see a form to fill.