|  0 Comment
Question 18
A publisher is interested in determing whinf of three book cover is most attractive. He interviews 400 people in each of the three states (Califonia, Illinois and New York), and asks each person which of the  cover he or she prefers. The number of preference for each cover is as follows:

Do these data indicate that there are regional differences in people’s preferences concerning these covers? Use the 0.05 level of significance.

Solution Steps
As usual, we need to understand the problem and decide on which particular test to carry out.

In this case, since the question asks if there are regional differences in people’s preference, it means we need to test if the groups of data depends on other groups. So it would be Chi-Square test for independence.
That is the hypothesis we are going to test.

Step 1: State the null and alternate hypothesis
H0: there are no differences in peoples preference
Ha: there are  significant differneces in people’s cover

Since we are going to be using Excel to simplify the solving of this problem, I have transfered the table to MS Excel. This is shown in Table 1. You can get the completed excel sheet from here

For example, the expected value for the first cell, containing 81 is given by

I have calculated for the rest of the values and the result is given in Table 2. 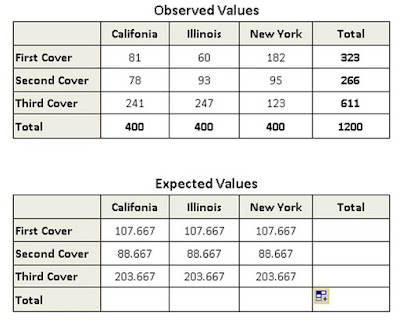 Step 5: Divide by Expected Value
This is the squared deviation you calculated in step 4 divided by the corresponding expected values. For the first value it would be

I have done it for all the values and the result is tabulated in Table 4.

Step 6: Calculate the Test Statistic
This is simply the sum  of all the values in the last table

Step 8: State your conclusion
Since the calculated value of the test statistic is greater than the critical value, we therefore reject the null hypothesis and conclude that there are no differences between the groups of data.

The whole tables are shown below, you can also download it for free