|  0 Comment
The F-Test one of the most basic and easy hypothesis testing to understand and perform.
This tutorial explains how to perform Fisher’s test in statistics.

Content
In this lesson we would consider the following topics

F-Test stands for Fisher’s test. Generally, this is the test used to Compare to variances.


The step by step procedure is given below. Although in solving a typical problem, we may have more steps if we further break down a step into two.

Step 1: Set up the null and alternate hypothesis

Step 2: Calculate the variaces of the two groups

Step 4: Look up the F value from Statistical Tables

In a packaging plant, a machine packs cartons with jars. It is supposed that a new machine would pack faster on the average than the machine currently used. To test the hypothesis, the time it takes each machine to pack ten carons are recorded. The result in seconds is as follows.

Perform an F-test to determine if the null hypothesis should be accepted.

As usual, we need to understand the question to be able to set up the null and the alternate hypothesis.
The null hypotheisis is what is currently believed and we want to test if we would continue to accept it or not.
From the question, the current believe is that the new machine is better. Which means that the means of the two machines are different.
The alternate hypothesis is the opposite of the null hypothesis. So let’s state them

Step 1: State the null and althernate hypothesis
H0: μ1 ≠ μ2
Ha: μ1 = μ2
Note: The null hypothesis says that the new machine is better. If this is the case, then the mean of the two samples would not be equal. That is the null hypothesis

If you have transfered this data to excel, you can easily find the means using the AVERAGE() function in excel. You will have a table like the on shown in Figure 1. 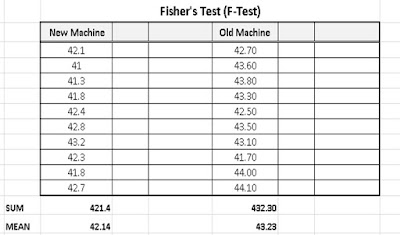 Step 3: Calculate Deviations from the means for the two groups
The deviations are gotten by subtracting the mean from each of the values. Do this for the two groups. After doing this the excel file would be as shown in Figure 2 with the D column calculated. 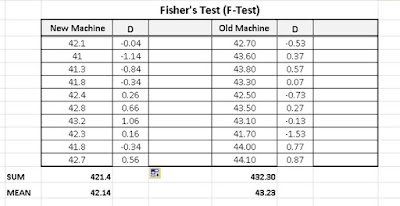 Step 4: Calculate the Squared Deviations
This step is very easy. Just take the square of the deviationss 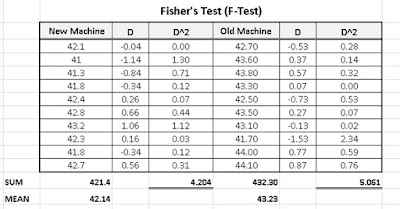 Step 6: Calculate the Variances of the two Groups
We would calculate this by hand using the values from the excel sheet. Then we also calculate this value automatically using excel formulas. The caluclation by hand is given below: 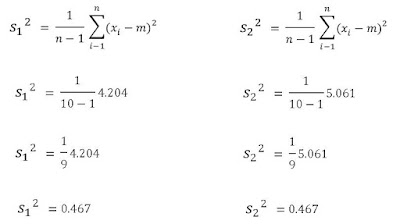 Step 7: Calculate the F-Statistic
The F statistic is simply gotten by dividing the Variance 1 by the Variance 2. This given by the forumula:

This value is the critical value of F

Step 9: State you conclusion
Since the calculated value of F(absolute value) is less than the critical value of F, we accept the null hypothesis.

Performing Fishers Test is quite easy. I however you have any issue following this lesson, let me know in the comment form by the left side of this page.

You can also download the excel sheet for this question from here. Then I would advice you try your hands on many other hypothesis testing examples listed here(Hypothesis Testing Examples).