|  1 Comment
Question
In a packaging plant, a machine packs cartons with jars. It is supposed that a new machine would pack faster on the average than the machine currently used. To test the hypothesis, the time it takes each machine to pack ten carons are recorded. The result in seconds is as follows.

Do the data provide sufficient evidence to conclude that, on the average, the new machine packs faster? Perform  the required hypothesis test at the 5% level of significance.

Solution Steps
Download the excel sheet for this excercise for free

Just as before, we need to try to understand the question clearly so we can set up the null hypothesis and the alternate hypothesis.

Note the following points about this question

Quiz: What type of test do you think would be used?
Answer: Independent Samples t-test

Step 1: Set up the null hypothesis and the alternate hypothesis 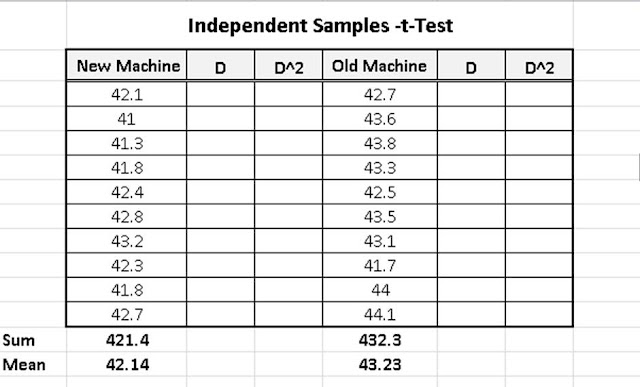 Watch how to easily create this table using MS Excel

Step 3: Calculate the Differences and the Square Differences
The difference is gotten by subtracting the mean from each of the values.
That is for i = 1 to n, calculate xi – m

where m is the mean of the sample

Then you square this values as well.
If you have done this correctly, the excel sheet would be as shown in Table 2 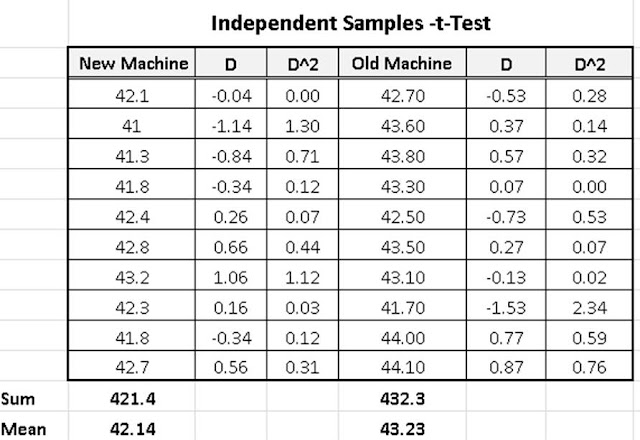 This formula is quite simple. It means that you need to calculate the sum of the squared differences (or deviations) and divide by n-1. We already have this column in our table(as D^2). So we simple take the sum of this coulmn.
Do this for the two groups to get s1 and s2

The tabe would the be as shown in Table 3. 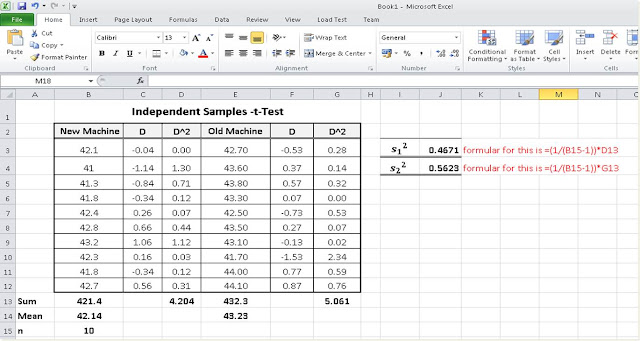 Step 5: Calculate the t-statistic
Using the data from the table in step 2, calculate the t statistic using following the calculation steps.
All the values you need are in the Table 3.

Finally we have it!
This value is called the calculated t statistics (or the absolute value of t, since we would not consider the negative sign)

The hint to getting used the t-statistic formula is to write it a couple of times on paper until you can write it without looking at this page. 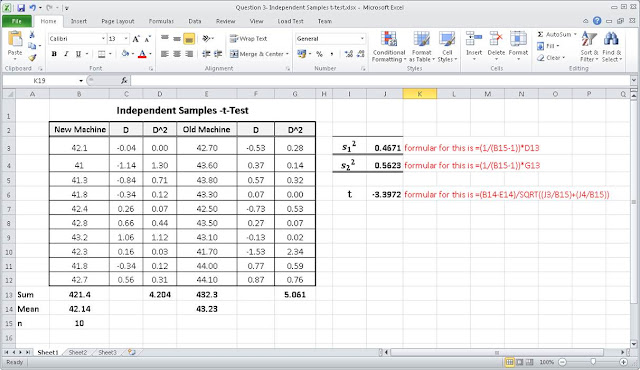 Step 7: Draw the conclusion
Compare the two values: the calculated t value and the value of t from the statistical table.
Since the absolute value of the t statistic (calculated) is greater than the critical value, we reject (or fail to accept) the null hypothesis.
We then conclude that there is significant difference in the two means and that the new machine is signicantly faster than the old one.


Download the excel sheet for this excercis for free

Watch the video of the lesson here

One thought on “Hypothesis Testing Problem – Question 3 (In a packing plant, a machine…”