See also What are Parametric Tests

Mann-Withney U (also called Wilcoxon rank sum test): Just like the Kolmogorov-Smirnov test, this is used to test  wether two samples are drawn from the same distribution.

Wilcoxon signed-rank test: This is used to test wether matched pair samples are drawn from populations with different mean ranks.

Sign Test: Used to test whether matched pair samples are taken from populations with equal medians.

Kruskal-Wallis one-way ANOVA on ranks test: This is used to test if two samples are taken from the same distribution. It compares two samples which could be of equal or different sample sizes.

Chi-Square Tests:This test is used to determine whether there is significant difference in between the expected frequencies and the observed frequencies in one or more categories.

Non-Parametric tests could be categorized into three different categories as shown below: 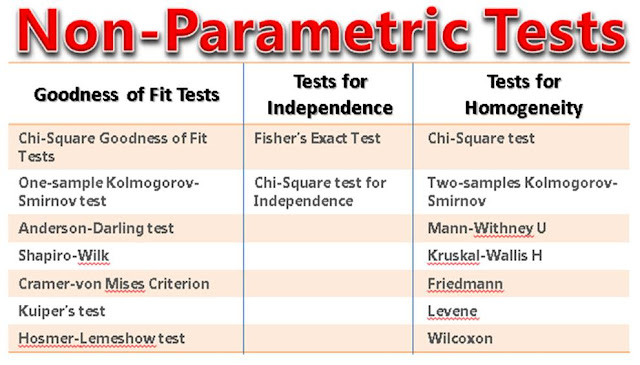 One thought on “What are Non-Parametric Tests in Statistics?”