Today, we are going to go through the steps of performing the Wald-Wolfowitz test (run test). Remember, the easiest way to understand hypothesis testing is to solve an example. So instead of boring you with explanations, we would solve an example together. I would be explaining as we solve.

Wald-Wolfowitz Test (also called Wald-Wolfowitz run test) is a non-parametric hypothesis test used to test the randomness of a two-valued data sequence. It tests to see if the sequence are mutually independent.

The three formulas for the Wald-Wolfowitz run test  are given below:

where the mean is given by the formula

and the variance is given by the formula

There are two IVM(Innoson Vehicle Manufacturers) buses, one with 48 passengers,  and another with 38 passengers.
Let X and Y denote the number of miles travelled per day for the 48-passenger and 38-passenger buses respectively. Innoson would like to test the equality of the two distributions.
That is, if:

The company observed the following data on a random sample of n1 = 10 buses carrying 48 passengers and n2 = 11 buses carying 38 passengers.

Using normal approximation to R, conduct a Wald-Wolfowitz test at 0.05 level of significance

We would solve this problem step by step.

Step 1: State the null and the alternate hypothesis and rejection criteria

Step 2: Merge the two lists and sort in ascending order 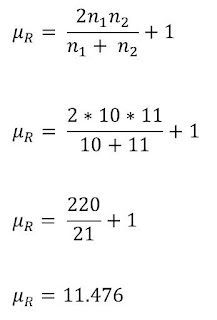 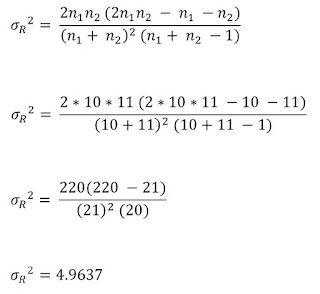 We calculate the value of Z following the formula below:

Note: Used 9.5 instead of 9  because we applied half-unit correction for continuity

We fail to reject the null hypothesis at the 0.05 level because the P value is greater than 0.05. This means that there is not sufficient evidence at 0.05 level to conclude that the two distribution functions are not equal.

Thanks for your effort in learning statistics. If you have any challenge, let me know in the comment box below.