Just as you know by now, this series of tutorials based on the PWD (practice-while-learning) approach.
So in this tutorial we would create simple application using AngularJS and then discuss various part of the application. This follows from Tutorial 2.

The application will contain a form with the following inputs:

In the second part, the user will enter his firstname and lastname, then when the button is clicked, you will display a greeting like:
Hello <firstname> <lastname>

Step 1: Open the Folder you created in Tutorial 2, which contains the two files: angular.min.js and Lesson 2 .html

Step 2: Open notepad and paste the following code or you can decide to type it out by yourself.

Step 3: Save it as Scripts.js in the same folder

Step 4: Open the html file you created and modify it with the following code

(Don’t worry, I will explain every bit of these codes. Just make sure you follow the procedure yourself!)

Step 5: Go ahead to save everything and open the html File. It would display as shown in the figure below: 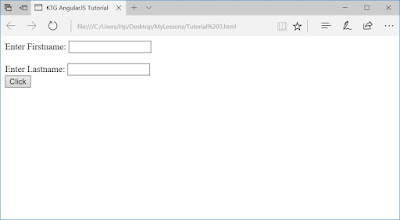 If you did everything correctly, then it would display a greeting with your firstname and lastname.
If you have any issues, leave a comment in the comment box below.

Now that you have completed this practical, we are not ready to discuss the parts of the lines of code we used in this tutorial. Let’s move on to Tutorial 4.

Also remember to watch the video lessons and download the powerpoint presentation.