The interesting thing is that everyone irrespective of your field can and needs to master these skills. For me as a Software Engineer, I use to think that I only needed technical skills, but I was so wrong after I worked for about two years. So I took a course in Project Management and got certified as a Project Management Professional(PMP).

Those managerial skills I acquired has helped me a great deal in managing people and situations in the workplaces. 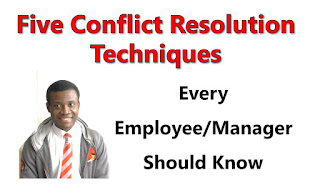 Now I still work as a Software Engineer, but I could tell you for sure that people-management skill very much supercedes technical stills.

The five skills are:

You may also want to read the following:

Let’s now examine this five techniques for resolving conflicts. As you examine the scenarios, look for areas you can apply it in you own work environment.

This technique involves avoiding any potential situation that may lead to conflict, or assuming for a moment that the conflict doesn’t exist. Or maybe planning to handling the issue at a later time when you are prepared and have the time.

Scenario: You observe a strained relationship between two employee such that they always disagree anytime there is a meeting

Application: Don’t get involved. And also try to avoid having both employees in the same meeting

Result: The conflict is resolved temporarily but remains

In this case, we try to focus on areas of consensus and deemphasize on areas of difference. Here the manager yields to the popular opinion if his personal opinion is in conflict.

Scenario: A manager is conducting a meeting and points out the need for a compulsory overtime to meet the project schedule

Application: Most of the team members object to the recommendation. The manager ends keeping the overtime optional but encouraging everyone to work extra hours anytime it is convenient for them

Result: Conflict among the team is resolved. But the may sometimes the organization have to give to make this work.

The Compromise/Reconcile technique involves looking for options that woul result in some degree of satisfaction to all team members or would partially resolve the conflict. This is similar to the Smooth/Accommodate but with a a little difference.

Scenario: A number of employee complain about low quality of PPE(Personal Protective Equipment) which has already been procured. Meanwhile some employees has been issued a higher quality PPE which is currently out of stock.

Application: Discuss with the employees with a lower quality PPE, have them fill out a form requesting for new PPEs. Then quickly approve these request and the allow the procurement department to sort out the rest.

Result: Temporary Solution to the conflict

In this case, on forces his opinion on others using the authorities he have.

Scenario: The manager of the IT department decides that every morning, all team member meet by a 8:20 am for a meeting to discuss the day’s activities. An administrator points out that he is normally at the data center at that time for backups/audit. The software automation test engineer object saying he normally runs tests between 8.00 and 8.30 am. Other team members raised objections too. The Deputy Manager does not say a word.

How it is can be applied: The manager responds that he would not tolerate exceptions to this rule and he expects 100% compliance irrespective of whatever reasons anyone may give.

This is probably the best way of resolving conflicts as it involves incorporating multiple viewpoints and opinions from different perspectives. I may require corporation and transparent dialog which eventually leads to a lasting outcome

Scenario: The Contract Manager meets a software engineer in the IT department and requests that he works with him for two months to develop a data entry form for logging change requests made on site. This request would be a difficult one due to the work load of the Software Engineer in his  department being the only Software Engineer there.

Result: Lasting resolution to the conflict and commitment from all parties.

Although these techniques applies mainly to managers, everyone could learn from the principles in them. Sadly, some employees/managers does not have knowledge of what to do in times of conflict in the work place.
In the next article, we would examine how to manage potential conflicts with colleagues in the workplace.

(Based on PMBOK Guide, 5th Edition)