This is an easy topic to understand if you understand the basic concepts I am going to present in this article. So read carefully as I will make the explanation very simple. This article would serve as a guide on how to choose a parametric test.

As you know, in statistics, there are two categories of tests that can be carried out:

Figure 1 illustrates the basic parametric tests and the summary 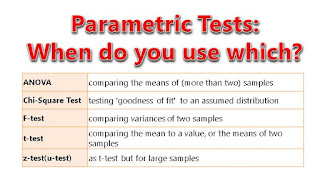 1. One-sample z-test (u-test): This is a hypothesis test that is used to test the mean of a sample against an already specified value. The z-test is used when the standard deviation of the distribution is known or when the sample size is large (usually 30 and above). And of curse the pupulation must be assumed to follow a normal distribution.

2. Independent-samples z-test: This is like the z-test, but in this case we are working with two samples and trying to find a relatioship(if any exists) between the two samples.

3. One-sample t-test: The one-sample t-test is a hypothesis test used to test the mean of a small sample taken from a population against a given value. The formular for calculating the t statistic is given below: 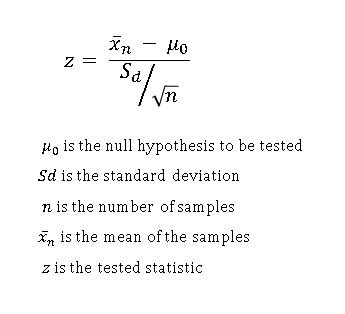 4. Independent-samples t-test: This is like the t-test, but in this case we are working with two samples and trying to find a relatioship(if any exists) between the two samples.

7. One-way ANOVA: The Analysis of Variace test is a statistical test used to compare if samples taken from populations have the same mean, or whether the population means are significantly different. An example is that of six different  suppliers that supplies steel to a company and the strenght of the steel is critical to the application which it is used for. ANOVA could be peformed to check if the average strenght of steel from the six suppliers are the same.

8. Bartlett test: This is also called test for homogenity of variance. It is a test to test whether the variances of samples drawn from different populations are equal.

9. Chi-Square Test: This is also called ‘Goodness of Fit’ test. It is used to test if a sample is taken from a population that conforms to a specified distribution.

The lecture is simple and clearly stated

Hypothesis Testing Problem - Question 1(In a population, the average IQ... - The Genius Blog