Hello everyone, as you know, I’m Kindson The Genius. I would like to share with you these 20 cool Machine Learning and Data Science Concept as well as a brief explanation of each.

I assume you are Learning Machine Learning and I would like to encourage you to continue learning and don’t give up, even if it appears a bit tough initially. Just keep moving. At the end your efforts will pay off.

I made this article because it is easier to read and understand a concept if you already have an overview of what it is all about.

Feel free to reach me via my website www.kindsonthegenius.com

1. Supervised Learning: This is a class of Machine Learning problem where the a dataset is provided(training dataset) and each observation has a corresponding class or label or target vector

2. Unsupervised Learning: This is a class of Machine Learning problem where a dataset is provided but no classes are provided.

3. Reinforcement Learning: This is a more recent class of Machine Learning problem developed in 1998 and is concerned with finding the best action to take in a given situation to maximize the expected outcome. One application  area is reinforcement learning is in Game Playing where the objective at each point is to take an action that increases the changes of wining.

4. Deep Learning: This is a class of machine learning algorithms which may be either supervised or unsupervised, that cascades multiple layers for computational units to extract features from input data. Deep Learning is a subset of Machine Learning. Also check Deep Neural Networks

5. Ensemble Learning: This is a learning process that tries to combine a number of learning algorithms to improve the performance of a model

8. Clustering (Cluster Analysis): Clustering is a class of unsupervised learning tasks that is concerned with finding subsets or clusters within a dataset. We try to group elements in such a way that elements within the same cluster have certain similarity while being different from elements outside the cluster.  Two main clustering methods are:

9. Dimensionality Reduction: This is a statistical process of reducing the number or variables being considered to a lower number of variables that can be used to explain the given dataset.  Types of dimensionality reduction include:

10. Principal Components Analysis (PCA): PCA is  a statistical technique used to map data from a higher dimensional space to a lower-dimensional space such that the lower dimensional data represents that maximum variance in the original data. In PCA, the principal components are obtain by a process of eigen-decomposition.

11. Singular Value Decomposition(SVD): This is a more recent and powerful method of dimensionality reduction where the original dataset is factorized or decomposed into ‘singular values’.
Given a matrix X with is an m x n matrix, then we can decompose X into three matrises:
X = UΣV*
where:

13. Hyperplane: A hyperplane is defined as a plane that is one dimension less than the ambient plane. This simply means that if we have set of points in a 2d plot, then the hyperplane would be a 1d line. Similarly the hyperplane for a 3d space is a 2d plane. And so one

14. Neural Network: This is also called Artificial Neural Network (ANN). This is a network made up of interconnection of nodes called neurons  and try to mimic the functioning of the neural network (nervous system) of living things. Node in neural network is not scattered randomly but arranged  in different layer as shown in the Figure 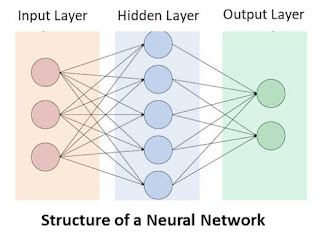 15. Neuron: This is the basic computing unit of a Neural Network. The neuron represents the edges of the neural network and is used to store pieces of information.

18. Recurrent Neural Network(RNN): This is a class of neural networks where the edges connecting the node forms a directed graph with traceable sequence. This property makes RNN suitable for modelling temporal behavior.

19. Constitutional Neural Network (CNN): CNN is a class of neural networks that is a bit more complex and are applied in image recognition and analysis.