Hello! Good to see you. I’ll be very happy to explain to you these two important concepts

These are big words, but trust me they are very easy to understand. Normally, these two terms are not directly related but they are two situations that create some problem during regression analysis.

So just as the two words are difficult to pronounce, they also make analysis procedure difficult!

As you know, I normally explain math and statistics concepts in a simple way to allow you clearly understand it and be able to present it in your own words during a quiz or an exam.

What is Heteroscedasticity?
Heteroscedasticity  means unequal scatter. This means that the  variability(or scatter) of a variable is unequal accross the range of values of the other variable that is used to predict it.
It is a systematic change in spread of the residual over the range of the measured values. This is illustrated in Figure 1.0 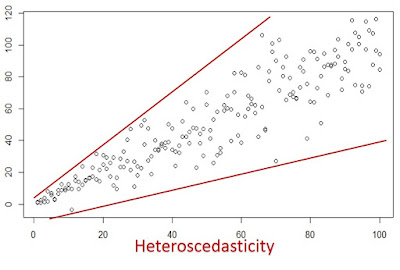 x1, x2,… xk are the independent variables
Ɛ is the error term

Variation Inflation Factor (VIF): The VIF shows the actual variance of the estimated coefficient of the ith variable, how many variables after this variable would be without the effect of muticolinearity. Same is calculated for the other variables.

VIF is given by the formula

Tolerance: This is given as the inverse of the Variation Inflation factor.  A low tolerance value indicates an increasing multicolinearity

Condition Index: This is a measure of the relative amount of variation associated with an eigenvalue. Large value of the condition index indicates a high degree of collinearity.

Quiz: Try to read more on Condition Indices and write the formula. Leave a comment if you succeed in doing this.
For now, I would like to thank you for reading

One thought on “What is Heteroscedasticity and Multicolinearity in Regression Analysis?”