The Run Test is actually one of the most interesting statistical test ever and it is so easy to understand, or even the easiest. Remember that if you have any difficulty following this lesson, let me know in the comment box below. 👇👇👇 I would clearify

In this simple lesson, we are going to explain in very simple and clear terms, the concept of run test in statiscs

Run test is a statistical test used to determine of the data obtained from a sample is ramdom. That is why it is called Run Test for Randomness.
Randomness of the data is determined based on the number and nauture of runs present in the data of interest.

A run is a sequence of similar or like events, items or symbols that is preceded by and followed by an event, item or symbol of a different type,  or by none at all.
Randomness of of the series  is unlikely when there appear to be either too many or two few runs. In this case, a run test need to be carried out to determine the randomness.
The Run Test when performed helps us to decide whether a sequence of events, items or symbol is the result of a random process.

A data scientist carrying out a research interviewed 10 persons during a survey. We denote the genders of the poeple by M for men and W for women.
Assuming the respondents were chosen as follows:

Scenario 2 has too many runs, 5 runs. And therefore would not be considered as random

Scenario 3 has 5 runs and therefore we need to perform a test to determine the randomness of the data.

First we need to assume that the data available for the analysis consistes of a sequence of observations, recorded in order of occurence, which we can categorize into two mutually exclusive types.

First, you need to determine the total sample size, then the number of observation ofeach type as presented below:

Hypothesis
Then State the null and alternate hypothesis


We can solve some examples to clarify this.

On a commuter train, the conductor want to see whether the passengers entering a train enter in a random manner. He observes the first 25 people, with the following sequence of males(M) and females(F).

Step 2: Find the test statistic (number of runs)
You can easily get this by grouping each run as shown below:

Step 4: Make your decision
Since r = 10 which is between 7 and 18, we accept the null hypothesis (we fail to reject it)

Step 5: Draw a Conclusion
There are not enough evidence to reject the claim hat the pattern of occurence of males and femals enter the train is determined by a random process

We have 20 people that enrolled in a drug abuse program. Test the claim that the ages of the people, according to the order in whihc they enroll occur at random, at α = 0.05.

Solution Steps
Step 1: State the hypothesis and identify the claim

Step 2: Find the test statistic (number of runs)
To find the number of runs we first arrange the data  in ascending order and find the median of the data set.

Then compare the original data with the median. The replace the above median in the original sequence with an A if it is above the median and with B if it is below the median.(you can also use the mean instead of median)
I have done this using excel and the result is shown below:

We can now arrange the data according to runs and we would have the output below:
B  A  BBB   A  B  A  B  AAAAAA   BBB

From the above  we have

Step 3: Find the Critical Value
n1 = 9, n2 = 9
From statistical table of Runs Test, we get the critical values

Step 4: Make the decision
Since the statistic r is between the upper and lower critical values, we accept H0

Step 5: Draw your conclusion
There is not enough evidence to reject the claim that the patter of occurence of ages of people in th program is determined by a random process

Table 1.0 shows the departures from normal of daily temperatures recorded at Atlanta, Georgia during February1969. We would like to know whether we may conclude that the pattern of departures above and below normal is the result of a non-random process. 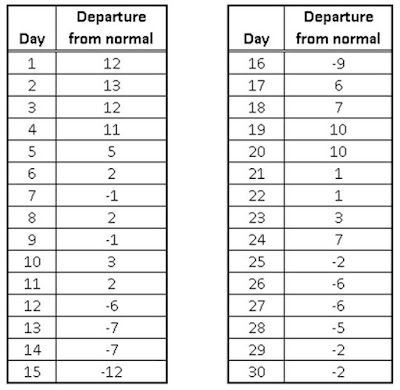 AAAAAA B A B AA BBBBB AAAAAAAA BBBBBB

Step 4: Make the decision
Since r = 8, which is lower than the critical value, we reject the null hypothesis (H0)

Step 5: Draw the conclusion
There is enough evidence to support the claim that the pattern of occurence of positive and negative departures from normal is not random

What if the sample size is large? In this case we could use a formula to solve it. This formular calculates the the test statistic based on n1 and n2.
The formula is given by:

Now that you have completed the lessons on run tests. Thumbs up to you! One thing you can be sure is it does not get more complicated than this.
Just a a quiz, try to solve the three examples using the formula presented and compare the result you have with the result gotten without using the formula

View all posts by →

Hypothesis Testing Problem – Question 3 (In a packing plant, a machine…